World security and international arbitration. Key findings of the IXth INTERNATIONAL ARBITRATION READINGS IN MEMORY OF THE ACADEMICIAN IGOR POBIRCHENKO 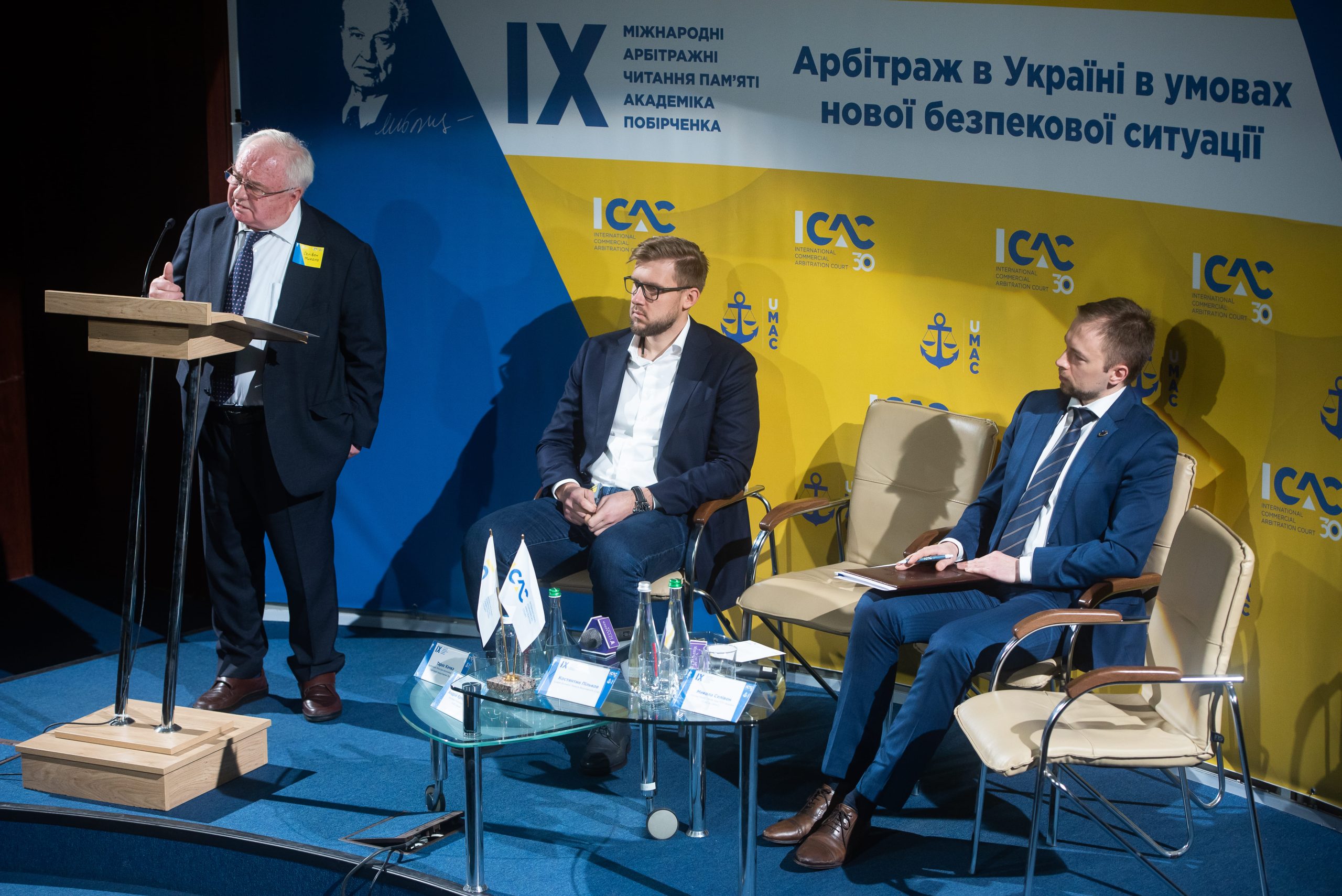 On 4 November 2022 the IXth INTERNATIONAL ARBITRATION READINGS IN MEMORY OF THE ACADEMICIAN IGOR POBIRCHENKO were held in Kyiv. The event took place in a hybrid format – live in the premises of the Ukrainian Chamber of Commerce and Industry in Kyiv adhering to security requirements during martial law and online.

The ICAC and UMAC President Mykola Selivon addressed more than 50 delegates in the hall and almost 500 online participants. In his introductory speech, Mr. Selivon emphasized that the war outside our windows is a war for the vitality of the Ukrainian nation, for the right to build our own State, for the opportunity to live, speak, be friends with those whom we, Ukrainians, decide for ourselves. Ukraine is fighting for fundamental human rights with weapons in hand, that is why Ukraine will stand and win.

Mykola Selivon noted that since the beginning of the full-scale invasion of Russia, the ICAC has suspended work only for a couple of weeks. However, realizing that the victory of Ukraine depends on each of us, and the work of each enterprise, institution is important, the ICAC resumed to fulfilling its task – ensuring the protection of the violated rights and interests of users of our services, including Ukrainian businesses, exporters and importers.

Military aggression required adjustments to the ICAC’s activities – at the organizational, communicatve, and regulatory levels. The response to operational challenges was found quickly and efficiently, at the same time, international arbitration must also respond to the latest political and economic circumstances, which do not yet have sufficient legislative regulation, but already affect the users of the ICAC services, in particular, the consideration of cases involving sanctioned persons.

Therefore, the speech of Andrii Yarmolsky, NSDC staff member, was extremely important. Mr. Yarmolsky focused in more detail about principals of the Ukrainian sanctions policy. Mr. Yarmolsky emphasized that of the Ukrainian sanctions policy is targeting to achieve economic weakening of the aggressor state and to put operational pressure on it. In this sense, according to the speaker, the Ukrainian sanctions policy is effective. At the same time, Mr. Yarmolsky noted the importance of in-depth each case analysis of the consequences of the application of sanctions for the economy of Ukraine. He stressed that sanctions are a political tool, not punishment, but prevention. Thus, it is worth imposing sanctions in a way that does not cause harm to the economic and social component of Ukraine, taking into account the risks of potential non-receipt of budget payments, job losses, destruction of business chains and other possible negative consequences for Ukraine itself.

Ukraine’s priority task today is to study thoroughly international experience and approaches to economic and social analysis in sanctions policy, as well as to risk management in connection with the state’s sanctions policy.

To continue the topic of sanctions, Kostyantyn Pilkov, Judge of the Commercial Court of Cassation, engaged the participants of the conference in a lively discussion of the decisions and legal positions of the Supreme Court in cases related to the imposition and removal of economic sanctions. Mr. Pilkov focused, in particular, on the following theses:

Mr. Pilkov also noted that there is currently no clear position on whether the imposition of sanctions on one of the parties to the contract can be considered force majeure. However, he shared his own thoughts on this issue. In his opinion, if a person knows, or is presumed to know, that there are grounds for imposing sanctions on him, that person was aware of the relevant risks when entering into the contract. Thus, the very fact of imposing sanctions is not force majeure. Kostyantyn Pilkov also advised to include a separate sanctions clause in the contracts along with the force majeure clause.

In the second part of the session, the participants of the Readings had the opportunity to get acquainted with the achievements and work plans of the ICAC.

Zoia Lytvynenko, the Secretary General of the ICAC, spoke about the functioning of the arbitration institution during the martial law: from the suspention of work of the ICAC in March 2022 until today. During this time, the ICAC Presidium addressed to arbitrators, participants in the arbitration process and users of arbitration services regarding the administration of the proceedings, and later developed changes to the ICAC Rules, which entered into force on 1 July 2022. Ms. Lytvynenko emphasized that the introduced changes are primarily intended to make arbitration proceedings more convenient during the period of a number of restrictions and security precautions related to Russia’s military aggression, to simplify communication between the parties and the Arbitral Tribunal, and also promote to complete moove to digitalization of the arbitration process.

Also, the Secretary General spoke about the changes made to the resolution of the NBU No. 18 dated 24 February 2022, which unblocked the work of the ICAC and UMAC, renewing the possibility of currency transactions related to the consideration of arbitration cases.

Ms. Lytvynenko reported that the ICAC Presidium made a number of decisions to improve the activities of the ICAC, in particular, the practical Recommendations on the submission of documents in electronic format and other practical issues of the administration of arbitration proceedings were approved. For the convenience of the parties, a separate section has been introduced on the ICAC website, which contains all the Recommendations.

Olga Kostyshyna, adviser of the ICAC President, emphasized during her presentation that the ICAC quickly and effectively uses the areas for growth that are opened up for the institution in this difficult period and has all the opportunities to become the main arbitration center in the CIS countries.

Ms. Kostyshyna drew the attention of the audience to the results of the recently published first-ever study of the quality of arbitration conducted by the publishing house “Yuridichna praktyka”, according to which 92% of respondents were in favor of expanding the range of the ICAC services by investment dispute resolution services, and 75% of respondents were in favor of introducing mediation services. Responding to such a request from users, Olga Kostyshyna announced implementation of mediation services from 1 January 2023, as well as dispute resolution services using the combined procedures “Arbitration-Mediation-Arbitration” and “Mediation-Arbitration”.

In addition, the speaker reported that the work on the draft of the Rules on consideration of investment disputes is at the final stage and shared some special novels of such a process. According to the speaker, the ICAC enjoys the trust of users and is ready to become a center for resolution of investment disputes after the victory of Ukraine and during its reconstruction.

At the same time, Ms. Kostyshyna emphasized the importance of the constant and constructive dialogue conducted by ICAC with stakeholders for the further development of Ukraine as a pro-arbitration jurisdiction, as well as the successful experience of those foreign jurisdictions that conduct a consistent state policy of supporting and popularizing their own arbitration centers and include relevant arbitration clauses not only in international agreements, but also in contracts concluded by state bodies or state enterprises.

At the end of the event, the organizers announced the holding in November 2023 of the jubilee X International Arbitration Readings, which will be dedicated to the 100th anniversary of the birth of academician Igor Pobirchenko.

Having held in extra difficult for Ukraine 2022 year the IX INTERNATIONAL ARBITRATION READINGS IN MEMORY OF THE ACADEMICIAN IGOR POBIRCHENKO, which is traditionally the main event in the field of international arbitration in Ukraine, the ICAC not only maintains institutional stability, continuing to consider cases in a timely and effective manner, but also confirms its status as a leading professional hub for the formation of a vision for the development of international arbitration in Eastern Europe.

The recording of the broadcast is available by the link.

On 4 November 2022 the IXth INTERNATIONAL ARBITRATION READINGS IN MEMORY OF THE ACADEMICIAN IGOR POBIRCHENKO were held in Kyiv. The event took place ...