NEW YORK CONVENTION ON THE RECOGNITION AND ENFORCEMENT OF FOREIGN ARBITRAL AWARDS: A 60-YEAR STORY OF SUCCESS

On 4 October 2018, one of the most important events in the field of international commercial arbitration – V International Arbitration Readings in memory of Academician Igor Pobirchenko – was held. This year the Readings were devoted to the 60th anniversary of the New York Convention on the Recognition and Enforcement of Foreign Arbitral Awards. The event was organized by the International Commercial Arbitration Court at the Ukrainian Chamber of Commerce and Industry under auspices of the United Nations Commission on International Trade Law.

A welcoming speech at the opening of the anniversary Readings was delivered by: 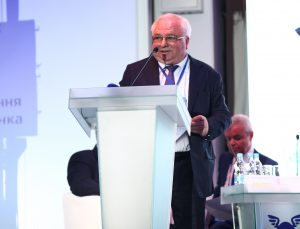 President of the ICAC Mykola Selivon, told that the New York Convention of 1958 is the foundation for the development of international commercial arbitration in the world, and also noted the factors that increase the importance of the Readings: “Firstly, the procedural law reform and institutional judicial reform. The renewed Supreme Court and the judicial system, as well as the new procedural legislation with the revolutionary approach to the international commercial arbitration, are now operating for about a year. Secondly, this year we celebrate the 60th anniversary of the New York Convention and it is important to underline the future of this international treaty. Thirdly, about 20% of the Readings participants are the judges of various courts, which is very important, since they carry out the functions stipulated by the convention, ensuring the enforcement of arbitral awards. And lastly, this year the remarkable arbitration expert, who created the ICAC and the MAC at the UCCI, Igor Pobirchenko, would’ve been 95 years”.

Head of Supreme Court, Valentyna Danishevska, mentioned some decisions of the Supreme Court on the recognition and enforcement of arbitral awards, and focused on the popularity of international commercial arbitration in the world: “In some countries the status of an arbitration as an alternative method of dispute resolution started changing from being alternative to becoming the main one and the state courts have already less influence on the formation of law than arbitrations. But the main thing is not who forms the law, but how it is formed. Nowadays are the best for the development of arbitration and the Supreme Court will support the development of not only the international commercial arbitration court but the other alternative methods of dispute resolution, because the entire judicial system is facing a great challenge to significantly improve judicial proceedings in Ukraine, as well as regain authority of judicial system”. 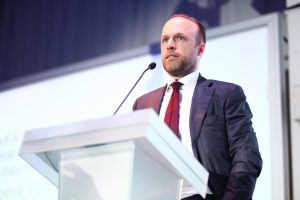 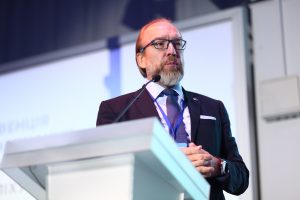 President of the Ukrainian Chamber of Commerce and Industry, Gennadiy Chyzhykov, continued the idea of pro-arbitration state policy: “Popularization of national arbitration institutions should be one of the core vectors of state policy. It is necessary to inform both the business and the international community that our arbitration legislation is now one of the newest. Ukraine is among the world pro-arbitration jurisdictions. Only the common actions of the arbitration community, the judiciary and the government authorities will lead to an efficient implementation of pro-arbitration policy”. 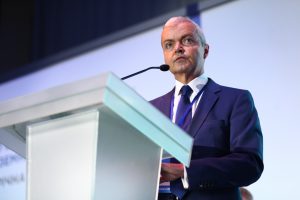 Special Guest of the Readings, Senior Legal Officer at UNCITRAL Secretariat, Former Secretary-General at UNIDROIT, Jose Angelo Estrella-Faria, is convinced that the New York Convention is the most successful treaty in the field of international commercial arbitration: “The New York Convention is a key element in promoting confidence in international trade investments and an indispensable tool for the efficient resolution of international commercial disputes. The convention was not developed to displace state courts or take commercial cases away from the domestic courts. The convention was elaborated to provide a mechanism that hasn’t existed before”.

The speakers noted that the success of the judicial reform and renewed procedural legislation would not have been possible without the participation of the ICAC representatives and their desire to strengthen the country’s pro-arbitration climate, in particular, by adopting the new Rules of the ICAC.

The first session of the Readings was devoted to the New York Convention, as an effective multilateral instrument in the field of international commercial arbitration.

The session was moderated by Ergun Оzsunay, Professor of Civil Law at Istanbul University.

The speakers agreed that the New York Convention on the Recognition and Enforcement of Foreign Arbitral Awards is the most important document used by institutions from more than 150 countries of the world, but some articles should be revised to conform the latest requests of the arbitration community.

The topic of the second session of the Readings was: “The Arbitration Agreement in the Context of the New York Convention”.

The session was moderated by President of the ICAC, Mykola Selivon.

The second session united the opinions of not only the arbitration experts who make the arbitral awards, but the representatives of the judiciary who ensure the enforcement of these decisions. The speakers highlighted issues related to the arbitration agreement, in particular its validity, in the context of the New York Convention.

The third session of the Readings – Recognition and enforcement of arbitral awards: from theory to practice – brought together the following speakers:

The final fourth session of the Readings was devoted to the experience in the application of the New York Convention around the world.

The session was attended by experts from different countries:

The Readings participants were able to understand the advantages and disadvantages of the application of the New York Convention in the native countries of speakers – Belarus, Great Britain, China, Latvia, Germany, Poland, USA, Turkey, Ukraine, France. Each country faces both similar and completely different, inherent to a particular country, difficulties in enforcing arbitral awards.

For the first time, the representatives of business, attorneys and lawyers had an opportunity to participate in the individual meetings with the ICAC arbitrators in order to ask questions related to protecting the interests of foreign trade participants in arbitration as well as to attend a meeting with the Secretary General of the ICAC and Advisor to the ICAC President to discuss the new regulation application and litigation procedure to the ICAC.

It is important to note that one third of the Readings participants  was representatives of the judiciary. This indicates the interest of the judiciary in arbitration and the strong cooperation of the ICAC with the judicial system of the country, because this cooperation helps to enhance and improve the implementation of arbitral awards by the Ukrainian courts.

The V International Arbitration Readings continued a good tradition of honoring the memory of the top-notch arbitration expert Igor Pobirchenko and strengthening the pro-arbitration climate of the state. Add to calendar 20200329 20200329 Europe/Kiev NEW YORK CONVENTION ON THE RECOGNITION AND ENFORCEMENT OF FOREIGN ARBITRAL AWARDS: A 60-YEAR STORY OF SUCCESS

On 4 October 2018, one of the most important events in the field of international commercial arbitration – V International Arbitration Readings in ...